So as mentioned in an earlier blog, I had an interview with Jon Kelly of Sine FM this week, for all things VTQ, ska, music and Doncaster :)

If you want to hear more, the show goes out on Friday 3rd August at 10pm, and it will be available from the Sine FM website as a podcast at the weekend.

I'll be picking it up by podcast myself as I'll be kicking it with Big 10 at a gig on Friday, but I'd love to know what you thought.

Apart from 'Isn't she squeaky?'

As promised, here's more footage from the final night of the Ultrazang tour that finished last week.


Posted by Saxylizbeth at 16:40 No comments:

Email ThisBlogThis!Share to TwitterShare to FacebookShare to Pinterest
Labels: butterfly, the scissors, ultrazang

Check out this video from the final leg of the (amazing) Ultrazang Tour.

Butterfly perform their genuinely brilliant song 'Flying Close to The Sun' at Epic Studios Norwich. I'll be posting more footage from them, The Scissors and Killamonjambo later in the week.

Posted by Saxylizbeth at 16:21 No comments:

A Mini Festival for the Ears...

...is how Altsounds.com described the latest Voodoo Trombone Quartet single, 'Hello Who Are You?' which I think is a lovely thing to say.

Check out the review in full here

The promo and rehearsal for 'Dress Down Friday' is bubbling along nicely. I'll be doing an interview for Sine FM next week discussing the new VTQ album. Sine FM is a community station based in Doncaster, who have been playing 'Dress Down Friday' for a while. Imagine how chuffed presenter Jon Kelly was to find out that the VTQ are in fact 1/8th Doncastrian.

I'm not sure when the interview will aired, but I'll post up on here when I find out.

Enjoy the sun y'all

x
Posted by Saxylizbeth at 15:40 No comments:

Just a quick update, here are nice things about the upcoming album, from Glasswerk.

The Voodoo Trombone Quartet are also playing in the New Forest, on 23rd September, with the splendid Police Dog Hogan. I'll put up more details when I get them.

So in the meantime, have a listen to this and think how much better it is than the official Olympic theme.
Posted by Saxylizbeth at 18:09 No comments: 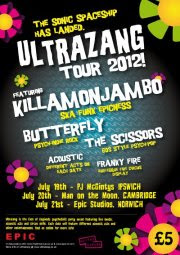 Well, I'm happy to say that Ultrazang is on the move, with a 3 date mini-tour this month. Ipswich, Cambridge and Norwich, the Zang crew will be bringing their good vibes to all corners of East Anglia.

Featuring Ultrazang regulars Butterfly, The Scissors and Killamonjambo, the tour will see the Zang return to its roots, playing PJ McGintys in Ipswich on 19th July. It will then debut the following night in Cambridge at The Man on The Moon. The tour concludes on 21st July in Norwich, at the very shiny Epic Studios.

With a bunch of awesome support acts, fire-based entertainment and no doubt people dressed as banana's, it's about time the word of Zang was known UK wide. Europe-wide. Worldwide and beyond.

Details of tickets for the tour are here. See you down the front (banana costume optional)
Posted by Saxylizbeth at 17:56 No comments: