See you down the (sea) front?

Popes of Chillitown are going to the seaside! This Thursday (4th August) PoC are heading to the Guava Bar in Southampton for 'Reggae In the South'

Here's the event link for more details! Its only a fiver entry and its PoC only August gig so it would be great to see the place packed!
Posted by Saxylizbeth at 12:24 No comments:

This is what our other halves were getting up to while we were perusing set lists and warming up... 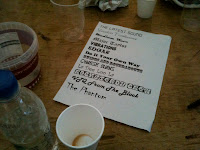 I've just returned from Chagstock 2011, a music festival held at the foot of Dartmoor. A festival for hardy folk.

It doesn't rain so much as the clouds get so low you're stood in them, and the wind is bracing to say the least. But the selection of music is varied, supporting local artists as well as getting a few big names along.


The headline act on Friday night was the ever impressive Show of Handshttp://www.showofhands.co.uk/ whose cover of Don Henley's 'Boys of Summer' went down a storm. Saturday's music highlights included a fantastic Brazilian reggae band called Aluminio Roots, and an astounding set by John Otway. Despite his forward rolls and theremin antics, Otway was in danger of being out-charisma'd by his guitarist, Murray Torkildsen, whose asides, geezer demeanour and stylophone solo just about stole the show.

The big draw for Saturday night were The Magic Numbers. Now, I quite like their albums, but as a live act they were just so-so, a bit tame. But then without lead guitarists hanging off ladders and babies dangling from the stage, I suppose it would.

And so to Sunday. Gig day. Show time. And the cloud descended, a drizzly chilly day and we wondered if we were going to have anyone to play to at all. But whoever coined the term 'Southern Fairies' clearly hadn't met the hardy folk who live on Dartmoor. They turned out for us and bounced like mad things, despite it raining sideways for most of the set. Our special guest trumpeter (Paul VTQ's son Oscar) proved popular with the crowd during 'Edgar', earning an encore! They bounced,  cheered, and apart from a few wristband jobsworths, Chagstock made us feel very welcome. The Voodoo Trombone Quartet hope to return to Chagstock for 2012, and we'll bring better weather with us next time!
Posted by Saxylizbeth at 15:37 2 comments:

I have been receiving a lot of enquiries for lessons on saxophone, clarinet and flute recently. My teaching book is fairly full, but there are a few slots available, mostly on fortnightly rotations.

I'm currently having problems accessing www.musicteachers.co.uk so if you have recently sent an enquiry to me through this, please email me directly on info@saxylizbeth.co.uk

Thanks!
Posted by Saxylizbeth at 14:36 No comments:

I'm very chuffed to announce some gigs with the Eastern Counties biggest ska band, Big 10. A fantastic ska covers band, local to Cambridge, I've seen them a fair few times and always had a very enjoyable, but sweaty time.  I'll be performing with them on tenor and bari for the next 9 months or so, and will be adding the gig details on to my gig page. In the meantime, go check them out at www.bigtenska.com
I've also depped this weekend for top ska tribute act, Utter Madness. The best of the Madness set, plus a few cheeky extras, it was really well received and I hope to work with them again soon. Its the closest I'll ever get to jamming with the real Madness (or even the Violin Monkeys) but it's a start.
Posted by Saxylizbeth at 14:55 No comments:

While the BBC were fawning over U2...

....the best act by a mile at Glastonbury 2011 was doing his thing over in the John Peel tent. It's difficult to get a sense of how mind blowing DJ Shadows' audio and visual set is, but this video certainly helps. This unassuming guy from California, humble, appreciative and in awe of John Peel, was a real treat, and far less vomit-inducing than the U2 footage on BBC Iplayer. Enjoy!!!
Posted by Saxylizbeth at 14:40 No comments:

A few weeks ago I did some recording for a new singer called Jack Shalloo. An actor and singer, Jack collaborates with former Voodoo Trombone Quartet guitarist Spesh Maloney. So when Spesh needs a horn section at pretty short notice, who's he gonna call?

Recording a live EPK for Live Nation, we performed three songs from Jacks' first album 'London Soul' (available here) and I have to say it's very good stuff. The honest lyrics pair beautifully with Speshs' arrangements, with hints of Stevie Wonder and Steely Dan popping up when you'd least expect it.

Jack Shalloo will be gigging in and around London over the next few months, go check him out! (and until then go get the album to tide you over)