The time is nearly on us.

It's my last Popes of Chillitown gig this Friday 21st October, at Ginglik, Shepherds Bush. The home of some of the maddest PoC gigs ever, it seems fitting to play my last one there.

All the who/where/what info is here .

You always thought you'd be able to catch me perform with PoC at the next gig. For me, there won't be one.
This really will be the last chance to dance.

See you down the front.

x
Posted by Saxylizbeth at 16:18 No comments:

Email ThisBlogThis!Share to TwitterShare to FacebookShare to Pinterest
Labels: ginglik, popes of chillitown

I recorded this performance at the Zang on Friday. Rob Castellani. Watch, be amazed, then be glad that X-factor has quite taken over the world just yet.

Posted by Saxylizbeth at 22:17 No comments: 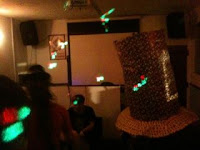 Last Friday I gigged with PoC at one of my favourite nights in the country. The fantastic Ultrazang began a year ago when Chris Hollands got fed up with the same old club nights in Ipswich, and so decided to start one of his own. A night about real music for people who didn't conform to the cliche Friday night heels, fake tan and t-shirts with arrogant slogans.

Chris took over the back room at PJ McGintys and Ultrazang was born. PoC played it early on and we've been back several times since. We can't get enough. It has a great atmosphere, the crowd dance round like mad things, the sound is excellent and they have Giant Dancing Top Hats. What more could you want?

The greatest thing about the 'Zang is there really is no night in the East of England to rival it. It's unique. And Chris, being a music promoter genuinely in it for the music, is pretty unique too. Check out the facebook group for news of the next one.

Here is a video of PoC at Fridays gig, performing Dalking Man. Enjoy.

Posted by Saxylizbeth at 21:58 No comments: