More details are now available about the Special Bennys Album Launch, at which the Voodoo Trombone Quartet will be warming things up nicely.
Posted by Saxylizbeth at 18:45 No comments:

Its just been confirmed that Popes of Chillitown are supporting Mouthwash at Islington Academy on 4th December 2010!!!

What can I say?

Popes of Chillitown at The Haymakers! 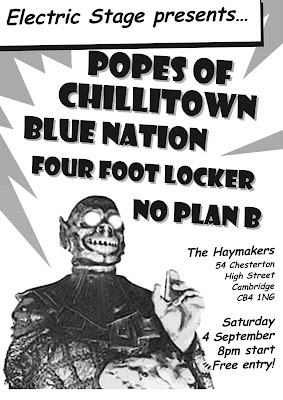 Heres the poster for our next gig!
Posted by Saxylizbeth at 14:12 No comments:

The Voodoo Trombone Quartet and I have been making music together for five years now. Two albums, and EP and a shed load of festivals later, we're now working the corporate circuit, and doing the occasional fan gig at any cocktail bar who'll have us.

Here is the footage from a festival we did earlier this year, Chagstock 2010. We're playing at Special Bennys album launch next month and The Amazing Meeting in October. Expecting big stuff from that one!

We've been on many adventures, drunk lots of cocktails and a fair amount of Brothers Pear Cider, and been up and down the A303 more times than any band ever should. They are the VTQ, and as far as bands go, they're definitely the Husband
Posted by Saxylizbeth at 16:26 No comments:

Check out my band Popes of Chillitown and their new video for 'I See Dub People'. This track is available on the 'Ten Tone Tour' EP available here .

A London based ska-punk outfit, PoC have been causing me merriment and monumental petrol bills for 4 years now. With a good mix of personalities, and a drummer record to rival Spinal Tap, they're great fun and we play great songs. They are my pool boy.
Posted by Saxylizbeth at 16:15 No comments:

Lizbeth, and I play saxophone! Alto, tenor and bari, I'll read anything. And I'll play anything. Except Baker Street. So don't ask.

And this is my blog.
Posted by Saxylizbeth at 16:11 No comments: