This is it for a while though, until I make a decision about building a shinier cleverer website in wordpress.

I've added a new audio clip to www.skasaxophone.co.uk especially for all you Madness fans. There are a bunch of new shots on the Images page, from my recent shoot with AWE Photograpy. Thank you Kevin, they look splendid.

x
Posted by Saxylizbeth at 19:45 No comments:

I'm taking advantage of this extra day in February to get a bucket load of new stuff uploaded. I've added a new clip of 'One Step Beyond' to my video page, and I'll be adding an mp3 of 'My Girl' this week too.

I've also had the photoshoot results through from AWE Photography and they look fab. Live shots and portfolio, I'll upload them on here once I've figured out the best widget way of doing it. I'm thinking Flickr, but if you can think of other (better) ways, do drop me a line on twitter @saxylizbeth.

So, off to the video page with you. Prepare to skank!

Lizbeth
Posted by Saxylizbeth at 21:03 No comments:

Email ThisBlogThis!Share to TwitterShare to FacebookShare to Pinterest
Labels: awe photography, one step beyond, ska

...but it's a brass intro not to be messed with.

In honour of Dexys new album out this year, and the fact that Big 10 blew Over Community Hall apart with this on Saturday night...enjoy the new addition to my audio page :)

x
Posted by Saxylizbeth at 21:19 No comments:

I love half term, it gives me the time to do fun things like adding lots of new audio to my website.

Check out the new clips from my recent gig with Big 10 at The Junction, Cambridge. Our set included lots of Madness and The Specials, but the Bad Manners songs always have an extra energy.

Click on the page Ska Saxophonist available, or via www.skasaxophone.co.uk. I've put a selection on my audio page on the main site too.

Do leave comments if you like them, or even if you don't! You can tweet me on @saxylizbeth too.

Enjoy!
Posted by Saxylizbeth at 17:32 No comments:

End of an Era

This time last week Cambridge was covered in white, there was a 4 foot pile of snow next to the house where I'd dug my car out, and I spent my last day as a Pope, finishing the recording of the Popes of Chillitown debut album.

Eight songs in two days with two saxophones, many cups of tea, a blizzard, and the cutest kitten on the planet. With PoC drummer Jack and Paul Jones handling the mic fiddling and knob twiddling, I played the songs I hadn't played for months one last time.

Here are some pics from the recording session. It's been a pleasure, guys. I am proud to have been involved. 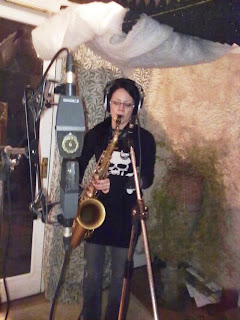 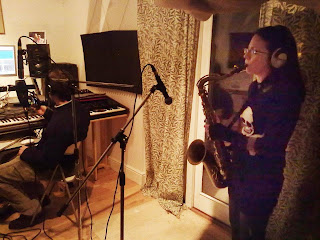 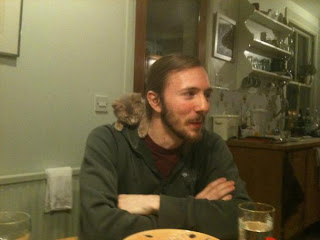 Posted by Saxylizbeth at 15:59 No comments: